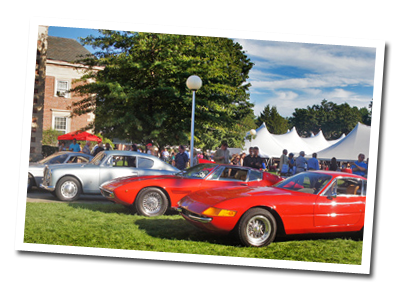 Learn more about the cars

A few of the featured cars of the Concours d'Elegance

From 1957 until 1967, the car was owned and raced by Martin Epp at Lime Rock, Watkins Glen, Thompson and other tracks on the East Coast.  Race history is currently being researched.  The car is known to have finished 15th at the 1965 October Regionals at Thompson.

The original engine was damaged while racing and sold by Van Thompson to Oregon in the late 1960’s. The current engine was originally in car number 84905 which was wrecked. The engine was purchased from Matthias Junghaus in Hamburg Germany in 1983.  A second four cam motor is currently under restoration by Gerry McCarthy, Billy Doyle, and Jeff Adams and may be complete by September.  It is a 547/5 Spyder replacement racing motor – 1700cc four cam roller bearing.

The car retains all its original panels and has covered fewer than 18,000 miles. The car was shown in October 2011 at the Porsche Race Car Classic at the Quail.

Click here to read more about this incredible 356 Porsche, feature at the Concours d'Elegance! This car was used in the 5th Peking to Paris Motor Challenge, one of the planet's toughest rally races.